watch this space for weekly updates to our offerings while in Covid 19 Lockdown. 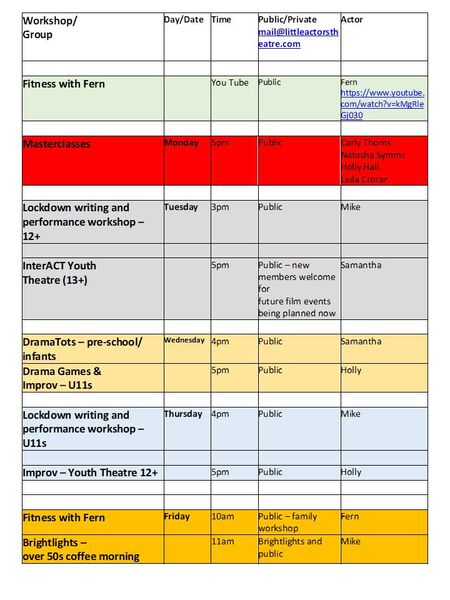 Carly played Miss Honey in the UK tour of ‘Matilda the Musical’ and was due to open in the West End as lock down started.

Holly Hall works as an actor, comedian and improv artist.

Natasha was formerly in ‘Hollyoaks’ and has appeared in several TV dramas, soaps and adverts.

Leila is a trained actor and dancer who runs Travelled Companions theatre in Liverpool.

Nicola is a seasoned actor working with Northern Broadsides, Cheek by Jowl, Hull Truck etc. She also writes for and performs on Radio 4.

Leila works extensively in theatre, TV and film. She has performed with Frantic Assembly and was seen in ‘Bohemian Rhapsody’

Fern is a trained actor who works regularly in Panto and with Little Actors. She is also a qualified fitness coach.

Benedita is one of our Mum’s who has volunteered to share her craft skills with the children.
Next
Previous