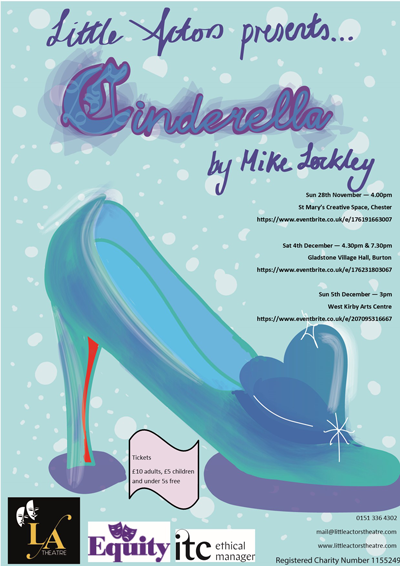 Cinderella by Mike Lockley - An original take on this classic fairytale, ideal for all ages. With a wealth of great characters, favourite songs and lots of laughs!

The tour will visit:

For further details on booking contact 0151 336 4302 or mail@littleactorstheatre.com or visit the venues’ websites

Mike is an experienced and accomplished actor, writer, director and drama practitioner who has worked extensively in theatre on projects as diverse as pantomimes, musicals, corporate events and Shakespeare. Mike has also worked on TV and film projects. He trained in at LAMDA completing the Associate in Acting Diploma. Mike has won many awards for his writing. He has featured as Gruffud in the US film ‘Dragon Crusaders’. Mike runs his own theatre company operating the ghost tours in Chester. He has been the drama director for Little Actors for over 10 years.

Samantha has a University of Liverpool BA General (Drama and English) and subsequently trained as an actor on the Postgraduate Classical Acting Course at the London Academy of Performing Arts. She also has the Royal National Theatre’s Advanced Certificate in Directing Text for Young People (Central School of Speech and Drama).

She has extensive experience working with children in the community running a variety of drama activities in schools, nurseries and directing full scale productions with after school drama clubs. She is the founder and Artistic Director of Little Actors Theatre Company, the South West Youth Theatre and InterACT Youth Theatre where she has directed and/or produced many productions for the National Theatre’s Connections Programme. As a youth theatre director/producer Samantha has collaborated with the National Theatre for 25 years. Venues she has directed and/or produced plays at include The Young Vic, The Albany Deptford, The Lyric, Hammersmith, The Rose Theatre, Kingston, Tara Arts, Theatr Clwyd, The Lowry, Greenwich Theatre, Hampstead Theatre, The Gladstone and Storyhouse

Fern started acting at a young age at a local theatre group, where she learnt the foundation skills of Acting, Dancing and Singing, through examinations and practice. Fern has grades 1-4 in Singing, Tap, Ballet and Modern Dance and Grades 1-8 in Lamda. She went on to study performing arts at college before obtaining a 2:1 in Acting from the University of West London. Since Graduating, Fern has worked as a professional actress, starting her career in Theatre in Education, touring the country. She was a Red Coat at Butlins, Minehead, where she performed in and presented many shows. Children's entertaining is something Fern is no stranger to, she performs in a touring Pantomime every Christmas, where all her training comes into effect through energetic and larger than life characters. Most recently Fern has performed in Head over Heals and Bouncing Back, both written and directed by play write Gail Young and has also appeared in Netflix series Free Rein. When Fern is not acting she is a teaching assistant for children with additional learning needs in secondary schools and teaches drama and dance at another youth Group as well as Little Actors. Other skills include Fitness instructing and face painting.

Natasha attended the Italia Conti Academy of Theatre Arts in London from a young age. She graduated and moved to the north west when she gained her first role as a regular in Hollyoaks. Since leaving Hollyoaks she has appeared on stage in productions of Closer, Deep Blue Sea, Allo Allo, Raving Beauties, Back Before Midnight. Her commercial credits include: Golden Wonder, Coca Cola, Dulux and she played the Asda Mum in their controversial Christmas 2012 campaign. Television credits include: Coronation Street, Waterloo Rd, A Touch of Frost, Casualty, Dream Team, Heartbeat, Crime Stories, Heading Out and recently appeared as Marlons love interest Chloe, in Emmerdale.

As a director she has taken part in the National Theatres Connections festival directing plays for young people with performances at The Lowry, Theatre Clwyd and Tara Arts in London. She has a PG Cert from Central School of Speech and Drama and has been Performing Arts Tutor at West Cheshire College for over 3 years. She still has strong connections with the industry and has most recently appeared alongside actress Sue Johnston and Jason Watkins in a film for the Cannes Film Festival 2018.
Next
Previous