Final Award of the Year for Neston's Little Actors Charity 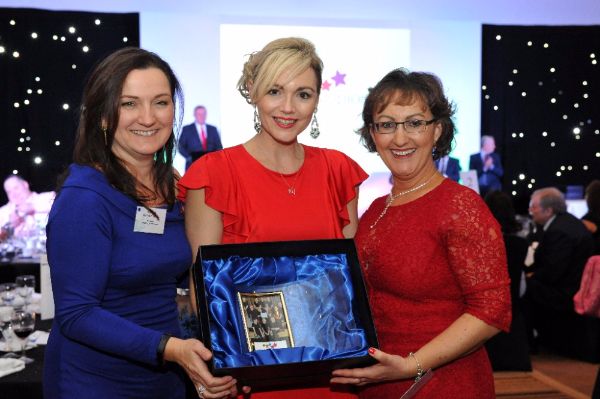 At the end of an amazingly successful year for Little Actors Theatre
another prestigious award came their way. At a glamourous evening at
Chester Crowne Plaza, Artistic Director Samantha Giblin and Co-Director
Natasha Symms attended the Your Champions Awards. The event was hosted
by Trinity Mirror and the Scottish Power Foundation. Little Actors had
been voted team of the year by the Ellesmere Port Pioneer. Therefore
they were shortlisted for the regional press award for teams from
Wirral, Chester, Runcorn, Ellesmere Port/Neston and Wales regions.
Although Little Actors did not win the overall title (this went to a
very deserving Wirral Women's group), they were presented with their
award by Nia from Scottish Power.

The guest of honour at the Gala Dinner was former Olympian, World
Champion and world record holder Colin Jackson CBE and the speeches and
awards given out were inspirational and moving. Samantha and Natasha
had a tear in their eyes for most of the evening. This brings the total
haul of awards in 2017 for Little Actors including their InterACT Youth
Theatre to five. We are immensely proud of the hard work and dedication
of all our children, young people, staff and volunteers which led to
these public acknowledgements.

Little Actors is a Registered Charity and strives to ensure access to
high quality, professionally led performing arts is possible for all
children through a scholarship scheme. In 2018 Little Actors is
planning to introduce an adult programme of work in drama and dance.
Their new venue - Neston Theatre Arts in Brook Street, will allow for an
expansion of the arts services.

We end 2017 very much looking forward to the challenges of the new year
which include entries in National Theatre Connections, the Leverhulme
Drama Festival, LAMDA exams and many appearances at community events in
Neston. Merry Christmas and Happy New Year from all of us at Little
Actors.