InterACT Youth Theatre - Yet Another Award! 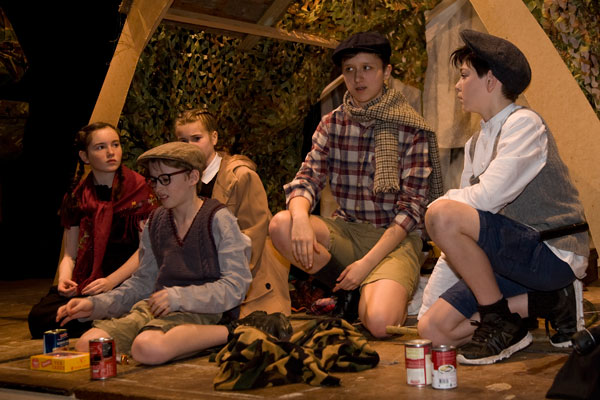 In July InterACT Youth Theatre took their award winning play 'The Snow
Dragons' by Lizzie Nunnery to the Lamproom Theatre in Barnsley. IYT had
qualified for the National Drama Festivals Association British Winners
Final. IYT qualified for the NDFA British finals as they had won at the
Leverhulme Drama Festival in April at the Gladstone Theatre in Port
Sunlight. The Lamproom was very welcoming and the production was well
received by both the adjudicator Russell Whiteley and the audience
alike.

The group came second and were given the Nan Nuttal Memorial Award
recognising their achievement in engaging young people in theatre. A
huge thank you has to go out to the parents who were prepared to get
their youngsters across the mountains to the Lamproom and to our
wonderful volunteer Trustee Elwyn Parry who has been with the group
through thick and thin. Also thanks to our funders - Neston Town
Council, The John Thaw Foundation and CWaC contributions from Nigel
Jones and Martin Barker. Directors Samantha Giblin and Natasha Symms
are very proud of everyone involved especially our young cast who
represented Neston with gusto.

September sees the start of preparation for the 2018 season. The group
has already selected their play for National Theatre Connections and the
same play will also be entered in the Leverhulme Drama Festival. IYT is
part of Registered Charity Little Actors Theatre Company and we are all
very proud of this award winning group of teenagers. Based in Neston
the group meets on Wednesdays 5-7pm at the Neston Community and Youth
Centre. Scholarships are available and new members are always welcome.
IYT has an open door policy and there are no auditions. Details from
0151 336 4302 or InterACT@littleactorstheatre.com
Next
Previous