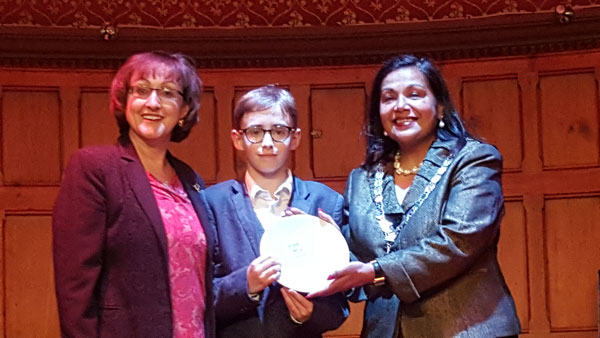 At the awards ceremony at Chester Town Hall. Artistic Director Samantha Giblin, accepted the beautiful ceramic award from Chester's Mayor. With her was 13 year old Joshua Stevens who is a member of InterACT Youth Theatre and one of our youth volunteers. Also present at the evening celebration were Trustees Sue Kendall and Elwyn Parry


Little Actors was nominated for the Cheshire West Voluntary Arts Awards. I’m delighted to tell you we won the Children and Young People category amidst stiff competition including Action Transport (a company funded as part of the Arts Council portfolio). The award is a beautiful bespoke ceramic dish (I’m not sure we’ll let the children hold it – just in case!). At the awards at Chester Town Hall the Chair of the judging panel gave the following citation:

It delivers its activities through four separate groups; drama tots for 2.5 to 4 year olds including their parents /carers, Theatre Club for 5 to 11 year olds, InterACT for 11 years plus, Neston Young Writers for ages 12 plus as well as summer Performing A course for Primary School Children.

They make significant subsidies to ensure wide inclusion and participation as well as actively encouraging young people with physical and/or learning difficulties. They are natural collaborators and engage with groups across the North West and more locally they actively engage in local community events. The quality of their work is award winning and highly regarded. The panel recognized that Little Actors Theatre demonstrates that working creatively with children and young people has not only the power to change their lives but through their community engagement, has the potential to improve the quality of the community in which they live.