Previous
Next
08/05/2017
At the recent Leverhulme Drama Festival, Neston's InterACT Youth Theatre came out on top. 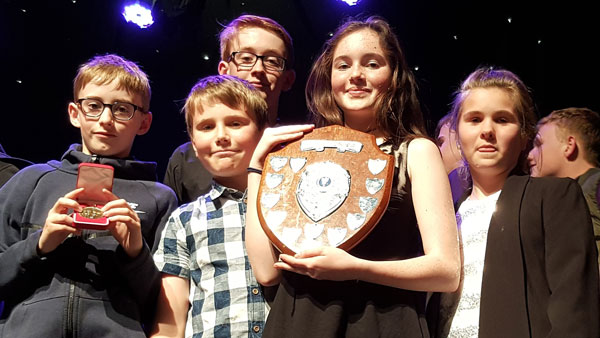 At the recent Leverhulme Drama Festival, Neston's InterACT Youth Theatre came out on top. With their production of 'The Snow Dragons' by Lizzie Nunnery the group won the Under 16s category trophy and the special Adjudicators Trophy. Adjudicator Richard Woodward described the show as a 'stunning production'. The group aged 11-16 years demonstrated impeccable team work and with strong acting and great production values they impressed on every level. Accepting the awards at the Gladstone Theatre were Jonathan Stevens (16), Joshua Stevens (13), Evie Lambert
and Emily Houghton (12) plus our youngest member Matthew Latham aged only 11. Artistic Director Samantha Giblin said she is so proud of the effort of all of the young people to create a piece of theatre of such a high standard. As the highest scoring youth group InterACT will be put forward for the All England final in July.

InterACT Youth Theatre has presented the play as part of the National Theatre's Connections programme of new writing for young people. They have had the amazing experience of performing in their home town of Neston as well as at The Quays Theatre at The Lowry and also the Gladstone Theatre Port Sunlight. The play by Liverpool Everyman playwright Lizzie Nunnery is a moving piece of theatre about how children are challenged to grow up because for the actions of adults. In this case the children form the resistance group the Snow Dragons in the face of the Nazi invasion of Norway. InterACT Youth Theatre would like to thank the funders and all volunteers for their unstinting support for the group.

InterACT is part of the Registered Charity Little Actors Theatre and offers an access for all approach to youth theatre. As a result of funding from the John Thaw Foundation and Neston Town Council, LATC offers 50% discounts to low income families. All funds are used to stage shows and activities. As a charity no one makes money from the group and young people of all ages and abilities are welcome. There are no auditions as mixed abilities are welcome.

Now IYT will now decide what to do for the next 12 months so new members would be most welcome at the start of a new exciting adventure in theatre. Possible projects for 2018 include NT Connections, the European Festival of Youth Theatre or the Leverhulme Drama Festival. We let the young people decide. Details from www.littleactorstheatre.com or 0151 336 4302 or InterACT@littleactorstheatre.
Next
Previous